It has been such a busy few days here at Daggett. Tuesday was full of fun, including our famous tie-dye Tuesday, and even a bran new night activity- “Jump into Reading.”  This night activity had campers recreate parts of their favorite books. This included Harry Potter, Moby Dick, The Lord of the Rings, and many others. It was amazing to see how imaginative and creative our campers are. Tuesday morning also saw our Triathlon. Our version of this classic challenge sees campers Run, Yak-Board, and Swim. Wednesday also had some early morning fun, with about 25 campers participating in our lake swim. During the lake swim, campers and staff are boated across the lake. From there, campers swim back accompanied by yak boards, lifeguards, and power boat escorts.

The excitement was certainly high on Wednesday. One of our most popular days is our Olympics. Campers competed in various events all throughout the afternoon.  The fun began at 2:00 when campers were split into teams ((Ireland, Australia, Sweden, and Zimbabwe), and got some time to make banners and chants. The opening ceremony proceed to the rec field, were representatives of each country carried the Olympic torch. Countries met and divided campers into their different games, with most campers getting to compete in 3 “Olympic Sports” as well as our Super Relay. Our Olympic sports included Hockey, Water Polo, Nuke ‘Em, Dodge-ball, and many more. The day also included group games such as the water balloon toss and tug o’ war. The games ended with our super relay, with many legs and a spot for everyone. During our closing ceremonies, it was revealed that Ireland took home the Gold for the evening, although it was certainly a close race and the true winners were all of our fantastic, enthusiastic Olympians. 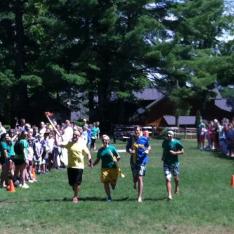 Campers cheer as the Olympic torch passes by 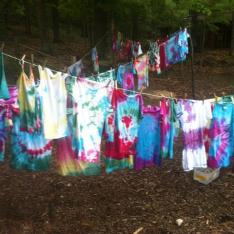 Our selection of tie dye 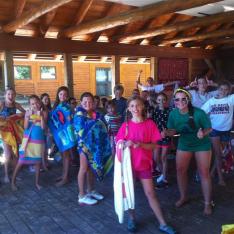 Olympians celebrate after the regatta
Advertisement

The Other Fellow First